In the many years that Piovan has passed to contact with burlaps and the colors, they are passes under its eyes innumerable memories and thoughts to you, memories that have condensed in color geometries, in ritmiche compositions whose pennellate musical partitura crosses the burlap like one.

Maurizio Piovan paints for entare in same contact with if and in order freeing the own energy, communicating to the outside all the force that is enclosed in the own spirit. This its way to be has consolidated in the years the propensione towards the separated language, than it has been expressed by means of polimateriche works whose aesthetic value resides essentially in the color and its musical suggestion. A slow one digradare of the tones to the inside of a harmonic search, therefore like its opposite one, that is the approach clearly of cromie to contrast, determines a sense of vitalità and movement in the work, than difficultly it remains to the inside of its same physical borders in order to escape “beyond” and provoking the perception of an infinite space. This the reason for which the artist it prefers burlaps of great format. Its search is born from the exchange with the nature, trasfigurata, or better tapered, until becoming pure spirit, chromatic essence. Desire to exit outside from the borders, to escape from the natural shape is expressed in the free one to get thicker itself or to become scarce of the color on the burlap, and in its ability to guard memories and values. Hardly perceivable traces cross the strong chromatic density and they leave “to see us” through the memory: every work of Piovan asks for being watched from far away and of being observed they give near, like if to the more careful look it were only granted than to intuire the mystery that is hidden under the color mantle. The emotions, the words, the thoughts take a garment and a body, is prevailed decided in the expressive force of the red ones and of the greens, they are made instead lyric suadenti and in the tonalities vanished of the grays and the orange. 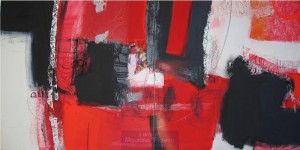 In its being a free Piovan investigator is confronted continually with the experimentation of several the artistic languages. Famous a particular one deserves the pittosculture that it has recently realized, in order to give one tridimensionalità to its pittorica search. Depths and light, than in its pictures are present through the color, in the totem and the pittosculture they become complementary and they derive from the conquest of the space and their porsi to 360 degrees to contact with the atmosphere.

Us it cannot be art without life. The life that is in the color of Maurizio Piovan leaves us to feel, like a marine breeze, the light and inebrante force of the spirit whom the essence of the art determines, its need to join and to communicate together. A search, this, that it expresses desire to catch up the “Euritmia “, the harmony that every contradiction melts and raises the truth to one advanced dimension.